Well fishing weekends should never start on a Friday 13th work and traffic conspired against me the only plus side Sam messaging me that the weather looked spot on for the weekend ...
My reply even better I’m heading there now!
A few expletives later & I’m rolling thru the gates of the syndicate.
As you’ve seen through the last few trips I’ve been concentrating on a area of the lake baiting heavily when I leave.
Though this weekend I baited with 3 kilo of glugged pellet with some crumbed TNT & fished TNT pop ups over the top of it.
Friday evening passed quietly though I did have a fish roll in the swim. Early Saturday morning about 4am the left hand rod let out a couple of bleeps eyes open brew in hand walking up and down swims looking for any signs
About 7 after no signs I thought sod it I'd get my head down only to be woken by an evil git called Samuel Blinking Chambers an hour later pulling the line thru my Delkim Alarm😂

Sam chose to fish the parish as it’s been doing one or two nice fish.
The next port of call was the Amwell cafe after doing my baliff round nothing had came out of Church lake but I’m sure at least one had come out of Parish.

Upon the slow fat waddle back from the cafe taking up our mutual residences the rods went back straight on the spots no problem 5 wraps (isn’t exactly difficult 😋).
Sam had a tricky cast to get his lead under a tree (he’s improving with my tutelage 😂😂😂),  only joking but he was under pressure with people watching.

As the day wore on we started to see fish in the vicinity of the tree line with the sun shining Sam decided on a Zig for one rod a LIVER PRO pop up just under 6ft into 8ft of water the second cast landed on the money but spooked a fish we were both a bit gutted at that but there’s nothing you can do.


By the time it rolled round to about 6pm the fish had returned with some new friends so it looked like Sam would be in for a good night “NO SLEEP” LOL.
I said to Sam I’d borrow him my spare stove so we both turned round only to hear an enormous crash in his swim turning at once only to be greeted by the same fish leaping out again it was massive and it went for a triple axle with pike a second later where upon we saw how wide it was my 1st words were "that’s a 30!" Sam was now buzzing his pants off in anticipation and I couldn’t blame him after getting him a stove I wondered back to my peg across the path hoping for a sign of life let alone a carp.

3am and a couple of bleeps on the right hand rod had me peeling an eyelid back for a quick glance. Sleep reclaimed me until 4:50ish for the same thing only this time it went into meltdown. Doing my best zombie impression I lifted into the fish only to feel it miles to my left in the half light I noticed my line was in the tree to my left so I sunk the rod tip clicking the line off and under them and in direct contact with one angry carp I then felt it swim thru something and then I had that feeling you get when your heart falls into your boots the hook came out now I’m only talking milliseconds when the rod hooped round again not really understanding what had occurred I kept on playing the fish when I got to netting range I had about 5foot of tree branches on my line all tangled up so dropping the rod I was snapping branches grabbing the rod snapping more branches to get enough of the fish into my net.
Once she was in the cradle I looked at my hook I could see it had been in the scissors had come out presumably when she charged thru the branch only for the hook to catch again by her gill plate, so I claimed it fair and square weighed her in at 25lb 2oz put her in the retainer and promptly went about exacting my REVENGE on Sam by pulling his line thru his Delkim he didn’t mind when I told him what I had waiting. Another plus was I got to name her.

So AMWELL has another stunning target called PEACHES

That ladies and gentlemen was that as far as action for us both roll on the next trip. 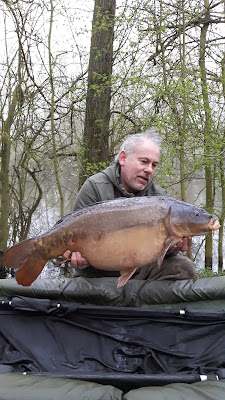